She sounds good, she stops good, and she goes good. But her gait is all wrong.

The final piece to the Handling Puzzle is the Suspension and Steering upgrade. Actually, it was not so much an Upgrade, as a This Old Kit Needs Replacing; Stef at Analogue Automotive had noticed the Dampers and Springs were in a dire condition when he was fixing up the Brakes. It wasn’t until he started pulling at a thread, that he noticed how bad things really were under there [a common theme with this Build!].

OEM Dampers and Springs were shot. Anti Roll Bars [front and rear] were in a terrible state. Drop link bushings and front Lower Arms shot. This was more than a Damper Upgrade, it was a Suspension and Handling salvation, but as I wrote before, if you wanna do something, you may as well do it properly the first time.

The Bilstein B12 setup I got was a package direct from Bilstein that included a set of EIBACH lowering springs [up to 40mm] and drop links, and for a Bag of Sand, the set seemed well priced. The B12 damper is not a Track Focused one, it is more described as Fast Road which, despite the 20mph Limit and short interval Speed Bumps in my area, would suit the Pig’s use.

There was some additional work to be done whilst she was on the Ramps at AA, namely the rear wheels replacing and a coupla upgrades to the Gear Shift.

The rear Cup 2 wheels I had were ET47, not stock ET55, which meant they sat 8mm more proud in the rear wheel arch. This may seem negligible, but makes quite a bit of difference to the appearance and the stance. I had found a set of ET55 for sale locally and snapped them up, but they need refurbishing; more cost yes.

I had read that there was a way of fixing the vague feeling in the gear shift, caused by a rubber bushing in the gear shift / gear selector connection; the Golden Rod. I kid you not. It is Golden, and technically it is a Rod. Anyway, enough Double Entendre, on with..

..then install all new Dampers, Springs, Nuts, Bolts and DropLinks..

..and send those shocking ARBs off for a media blast and powder coat..

..and after a Golden Rod insertion*, and a Short Shift Kit conversion..

..set up the Geometry to Club Sport specification, and drool..

was transformative.. Despite the obvious physical appearance changing, the Pig sits with intent, like she’s ready to go, already hunkered down in the pounce position requiring only a gesture of the right foot, to go..

Time for a Dawn Raid on the Capitol.

The plan was to enjoy the early morning’s empty Streets, blitz the Chelsea Embankment, a few of the Bridges, check the view from Primrose Hill, and sit down to Breakfast at St. Katharine Dock at Tower Bridge. 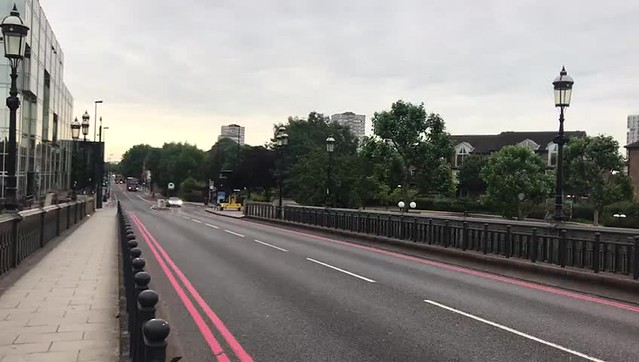 Battersea Bridge; Chelsea Bridge; Vauxhall Bridge; Tower Bridge; Southwark Bridge. Winding our way through the City with the howl, roar and burble of the Flat Six against the silence of a Sunday morning. A burning Sun low in the Sky, strobing through lamp posts, tower blocks, railings and tunnels. A head turned, a Dog alerted, a silence broken.

Her position in the road is controlled, on rails and conceding to the asphalt but fighting back when the push becomes a shove. Rubber warmed. Cornering on rails.

It’s been a rather emotional few months get the Pig to this state, it feels at last as though now (after quite a bit of expense I’ll admit) she is Road Worthy; she is Porsche Worthy. Having the work done at AA has been key to this. Stef has the same approach as I have in my mind about what work needs to be done. Yes, you can cut a corner. But then it’s a corner missed, and the journey hasn’t been complete.

Next on the list is the interior, and I’m aiming to have that done for an August Bank Holiday Road Trip to Spa, Belgium to watch the Grand Prix. I’d better get started..